High in the skeleton tree

Timing was everything in gleaning this photo. One minute a flock of birds was resting atop the old oak tree, and the next minute they were gone! Clearly, SOMETHING spooked them… but what? (Insert eerie laughter here!!) 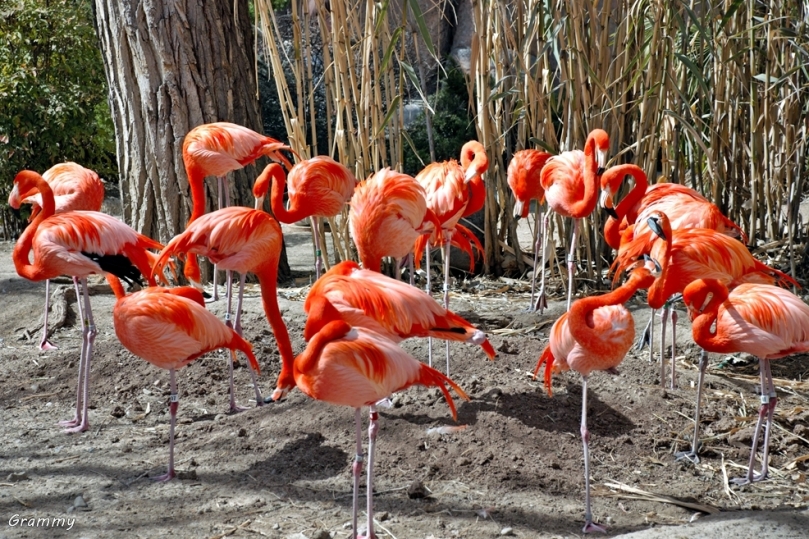 Flamingos are large water birds who live near lagoons or lakes and have long necks, stick-like legs and pink to coral-reddish feathers. Flamingos are pink because the algae they eat are loaded with beta carotene, an organic chemical that contains a reddish-orange pigment. If a flamingo were to stop eating foods with this ingredient, its new feathers would grow in much paler and the reddish feathers would eventually molt away.

Groups of flamingos are called colonies or flocks. The colony works together to protect each other from predators and to take care of the young. Flamingos are monogamous, meaning they stay with their mate for life. All the flamingos in a group will mate at the same time so their chicks will hatch together. Baby flamingos are gray or white and will turn pink within the first couple years of life.

It isn’t really known why flamingos tend to stand on one foot, but it is believed that by keeping one foot out of the cold water they stay warmer. It also seems to be a comfortable resting position for them. Flamingos live 20 to 30 years in the wild or up to 50 years in a zoo.

For Cee’s Fun Foto Challenge: Color of your choice (Orange/Coral/Pink) 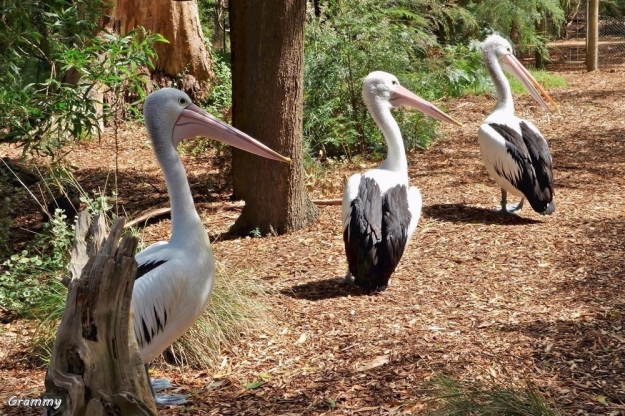 Three little pelicans went for a walk at the Healesville Wildlife Sanctuary in the Yarra Valley of Australia. This species, the Australian Pelican, is recorded as having the longest bill of any living bird. They are easily found near both the inland and coastal waters of Australia, New Guinea and Fiji, as well as parts of Indonesia and New Zealand. These interesting birds appeared to be playing follow the leader in their well-shaded habitat at this bushland haven for Australian wildlife about an hour outside of Melbourne.

At "Grammy Writes" I share poetry, prose and photos. Nature, travel and children seem to be my topics of choice, but a word prompt or photo challenge can inspire me as well,
Linda Powell