When we left for our tour of Italy, I knew I’d fall in love with Venice, and I was sure I’d like Florence and Rome; but I was not prepared for Assisi! I knew nothing about the place before our trip, so the peaceful charm of it took me completely by surprise! Assisi is the most picturesque little town I’ve ever seen and comes in at number two on my list of favorite places in all of Italy! 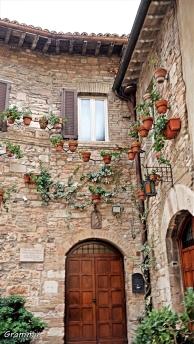 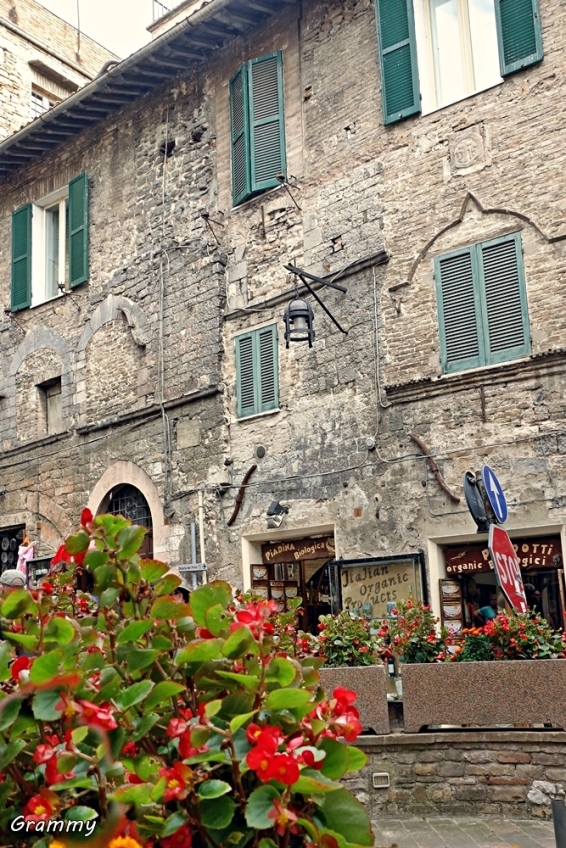 Assisi is another UNESCO World Heritage Site, and I don’t just mean the Basilicas, or the castles, or the tombs – I mean the whole TOWN is a UNESCO site! It is the birthplace of St. Francis, Italy’s patron saint. I was not aware of just how important St. Francis is to the Catholic Church. According to our local expert, Maura, he is second only to Jesus. He renounced all his possessions and devoted his life to helping the needy and he founded the Franciscan Order. For centuries, his followers have come to Assisi to visit the Basilica where he is buried. It was over-cast and extremely windy the day we were here – perhaps St. Francis had something to say! I was listening and I could feel his presence! 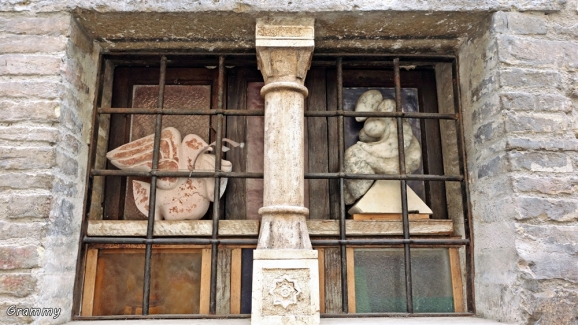 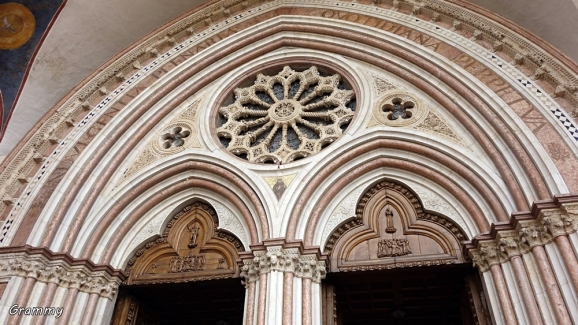 St. Francis’s Basilica consists of two churches, one on top of the other, with a crypt below containing the sacred tomb of the Saint. Construction of the Basilica began immediately after St. Francis’ death in 1228 and was officially completed after the addition of the upper church in 1253. It is a massive structure with the upper church being a celebration of life and beauty while the lower portion reflects the simple spirit of St. Francis and his Franciscan order. Both sections have incredible frescoed walls. 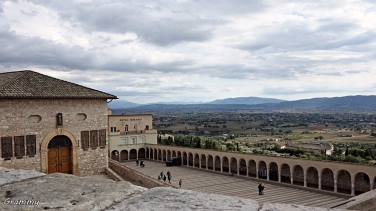 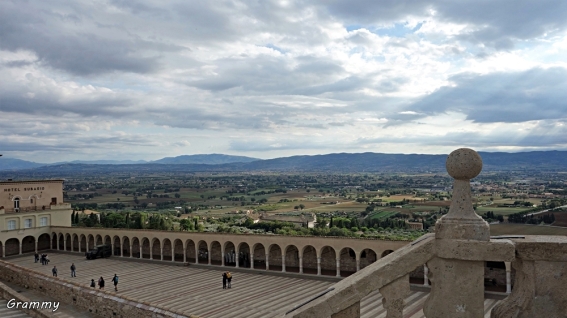 We were cautious of cars as Maura lead us down the narrow streets to the Basilica of Santa Chiara (St. Clare). This church was built in the Romanesque style and is dedicated to (and contains the remains of) Saint Clare,  another figure who deeply influenced this hallowed town. She was a follower of Saint Francis and the founder of the Order of Poor Ladies. 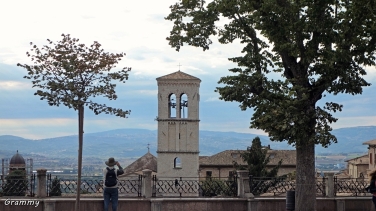 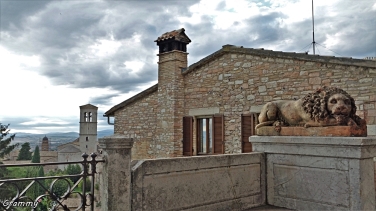 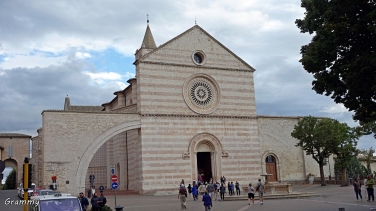 The Piazza in front of this church offers sweeping views of the Umbrian Valley… no doubt lovely at all times, but especially gorgeous at sunset! 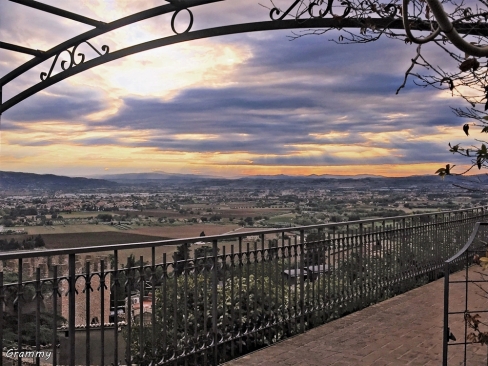 You don’t have to be religious to enjoy the beauty of this captivating town. If you’re tired of visiting churches, you can always explore the medieval castles that preside over the valley, or simply stroll the cobblestone streets and admire the soft pink and yellow hues of the best-preserved medieval town in the world! 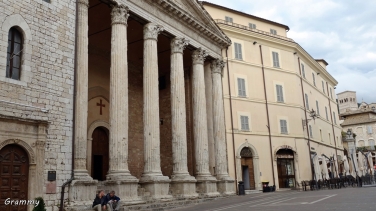 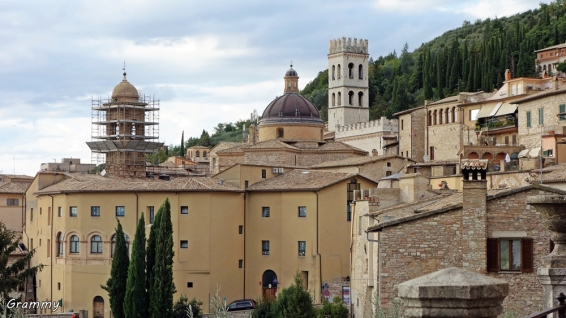 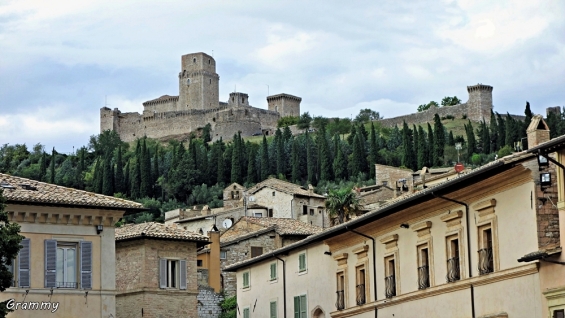 Even though Assisi has its share of touristy souvenir shops and a few hotels (ours was the Windsor Savoia), they each conform to existing urban design, leaving the entire village virtually untouched by modern architecture. Every turn of the head is a picture begging to be taken—and I took plenty! 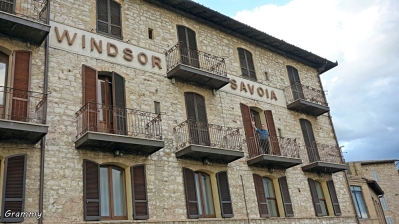 Note to self: don’t research every little place before traveling. A surprise or two along the way can be oh, so nice; like Assisi was! 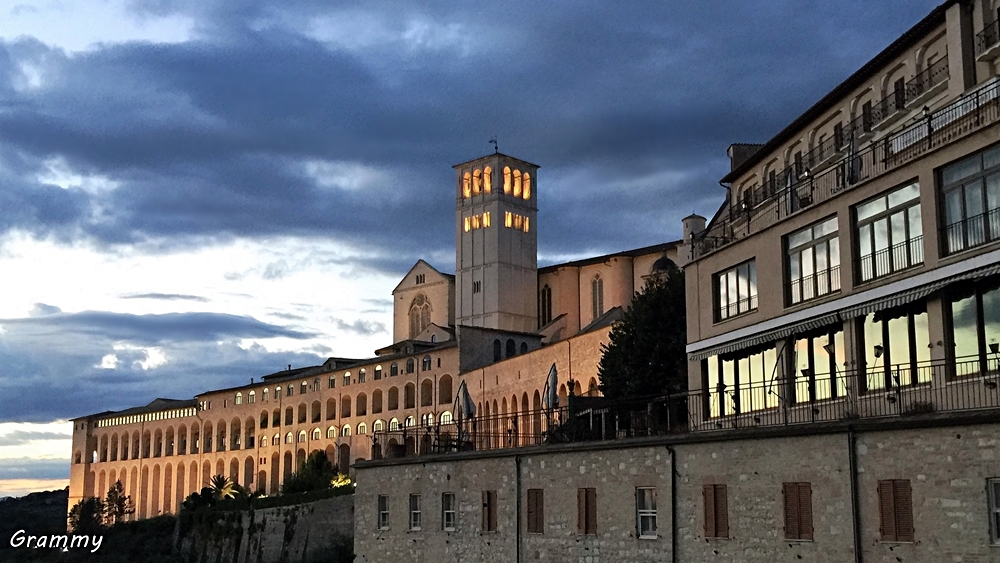 Because of a late start the next morning, tour director Anna and bus driver Giorgio were concerned about the traffic; but we arrived in Sorrento with enough time to drop off those not going on to Positano, then we set out for the Amalfi coast. The Amalfi coast was another agenda item I specifically looked for when choosing our tour, so of course we took the drive down the coast which Globus gave us an opportunity to do. 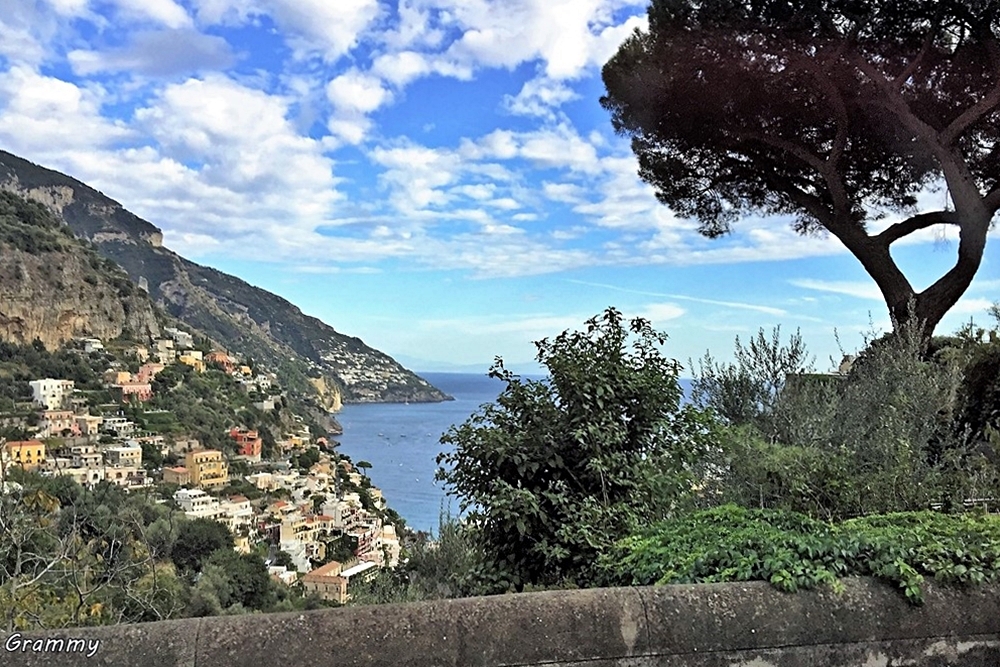 The road between Sorrento and Positano follows the physical coastline of the Mediterranean Sea and has mountain walls on one side and sea cliffs on the other. It is very narrow and full of hairpin turns, so instead of our regular tour bus, we rode in passenger vans operated by drivers with experience on this stretch of the road. The challenging route made it difficult to stop along the way, but we were able to pull over at the Madonnina photo stop for breathtaking views of the coast. 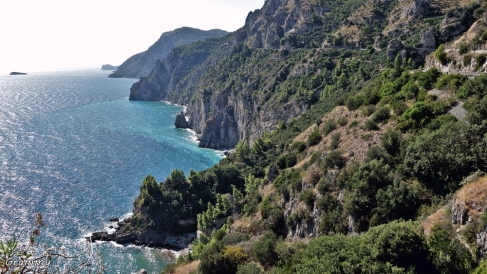 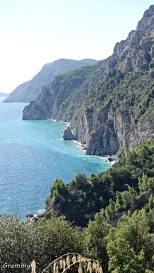 The landscape here blends impressive engineering with the stunning natural terrain. Throw in some vineyards, lemon groves and vibrant blue water—and you have all the splendor of the Amalfi Coast! 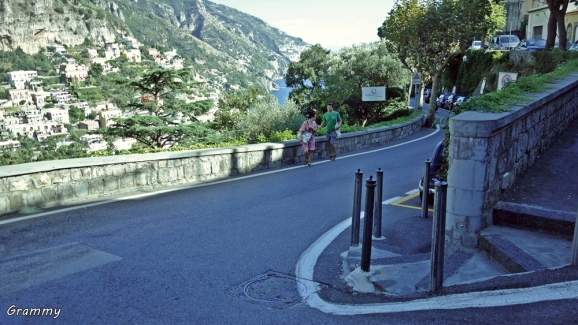 Quaint and famous Positano is known for its terraced Mediterranean-style architecture, vertical staircases, and regional products like limoncello, painted pottery and lace. It’s a fun town to walk around in if you don’t mind an incline. We took a steep pedestrian-friendly street from the parking lot down to the beach, past unique little shops, restaurants, monuments and churches. 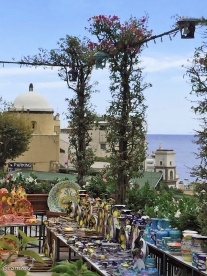 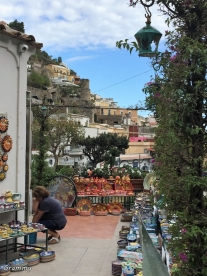 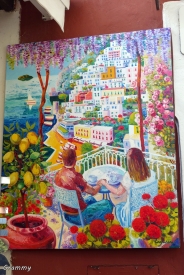 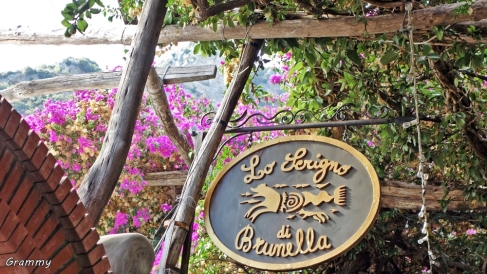 At the base of town is the Marina Grande beach which has unusually dark sand – a striking contrast to the deep blue water. Looking toward the mountain from the beach, the tiled dome of the Church of Santa Maria Assunta prominently stands against a backdrop of colorful houses clinging to the cliffs above the sea. Just amazing! 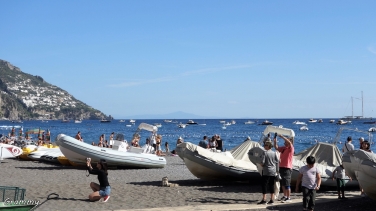 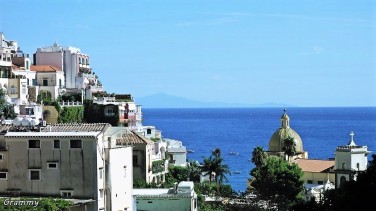 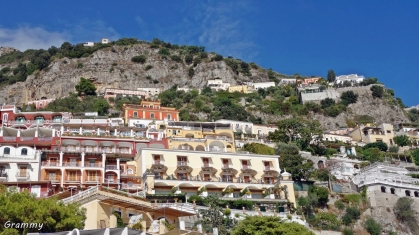 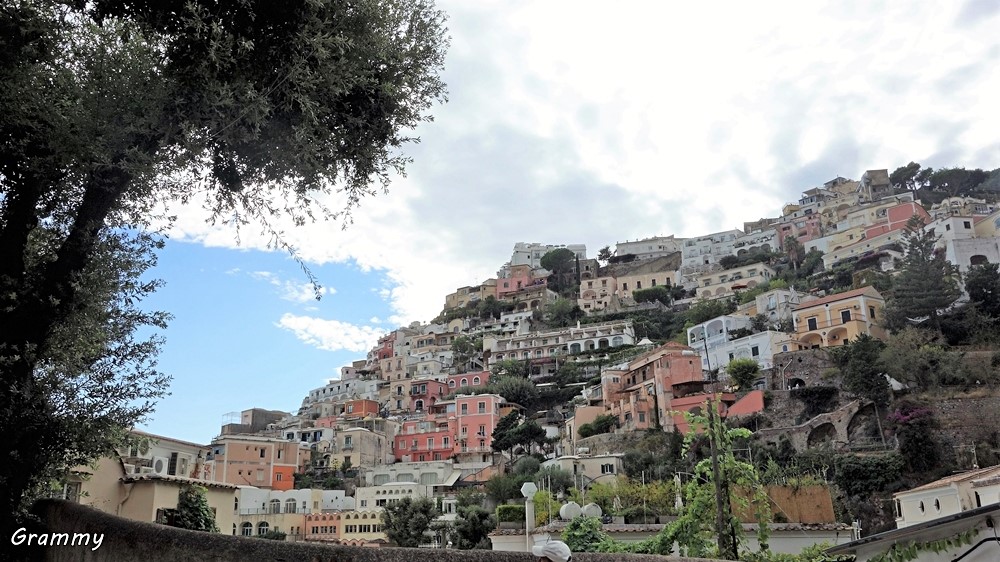 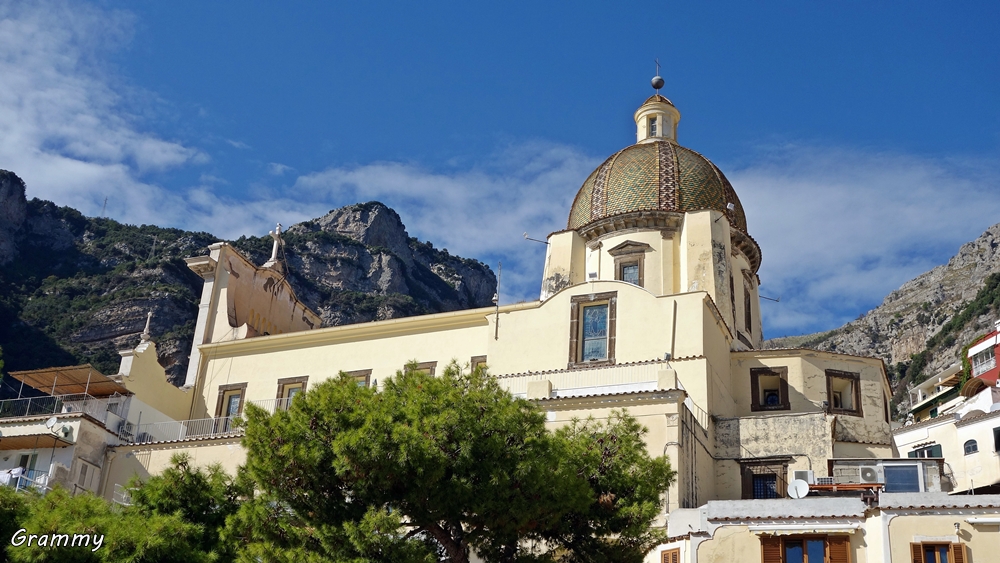 We left Positano for another nail-biting drive along the coast back to Sorrento. More about that in Part Six – Sorrento, Isle of Capri, Pompeii and conclusion. Arrivederci for now!

(Note: a click in each grouping of photos allows you to see each one individually)