I love how poetry is subject to interpretation. All writing is, to a certain degree, but poetry often means different things to different people and can stretch far beyond what the writer imagined. Take last year’s poem Thanksgiving in Hannah’s Kitchen, for instance. It met with mixed reviews: some liked it, some did not. Some saw it as funny and some found it sensual. Here’s how I see Hannah. She is the oldest, probably lonely, and least hospitable member of her family. She has prepared more Thanksgiving dinners than she cares to remember. She has the timing of every dish down to a science and prefers to do it herself over the drama and chaos that comes with “help”. Time alone finds her reminiscing, but there comes a point during her familiar routine when she grows impatient with the turkey… and maybe with herself. Here again is Thanksgiving in Hannah’s Kitchen: 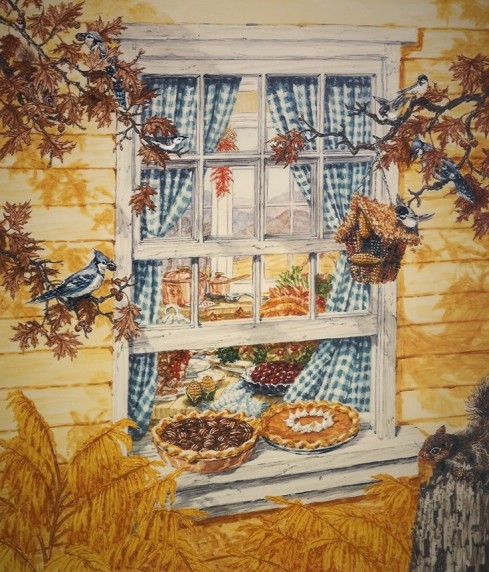 emit themselves from the depths of Hannah’s kitchen

where she busies herself with tasks no one will notice:

and flour swept from the floor after making pies.

Many in her family have offered to help

but Hannah finds them useless

She fills the bird with stuffing and rubs him with oil,

massaging the skin as if it were a former lover.

She reflects on by-gone days and early escapades

into the promises and promiscuity of youth.

She glances around the kitchen,

embarrassed by the direction her mind has gone;

just one more reason she is glad to be alone.

She tends to the turkey once again,

It startles her when his legs become untucked,

as if wanting to stand up, one last time, in the shallow pan.

Meticulously she binds them—tighter this time

then shoves the whole damn turkey into the oven.

Happy Thanksgiving to those of you who celebrate it!