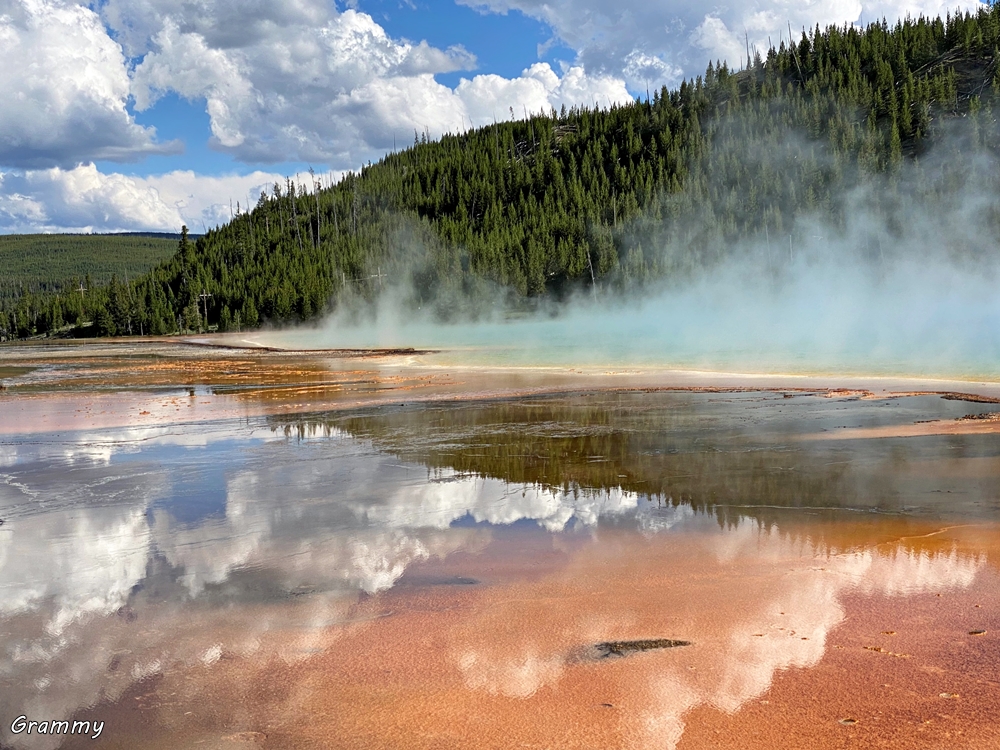 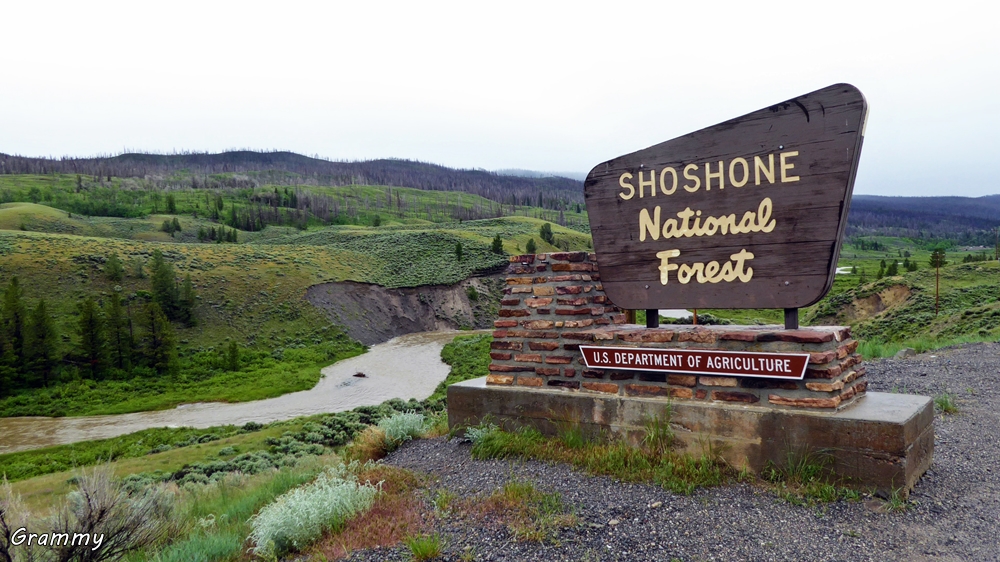 Between Scotts Bluff and the Grand Tetons, we stumbled upon old Fort Laramie, Wyoming, once the principal military outpost on the Northern Plains. With the end of the Indian Wars, Fort Laramie was of little importance and abandoned by the US Army in 1890.  Eleven of the original structures have been restored and Fort Laramie is now a National Historic Site.  As with most of the National Parks on our agenda, the visitors center and indoor facilities here were closed due to Covid-19 concerns. The park grounds were open, however, and Park Rangers were present and more than willing to share information. It was a Park Ranger who suggested we visit the Oregon Trail Ruts and Register Cliff which were also in the area.  We are glad we took his advice! 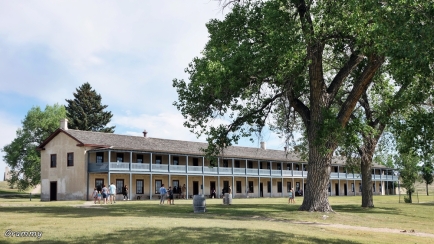 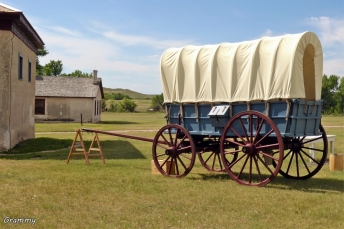 The Oregon Trail Ruts is a State Historic Site and a National Historic Landmark. Remnants of the pioneer trail can be seen all over Wyoming, but the tracks here are the best-preserved set of Oregon Trail ruts anywhere along its former path. We walked the short trail uphill to where 4–6 feet deep gouges were cut into solid rock by the wheels of wagons between 1841 and 1869. The geography of the area forced thousands of wagons heading west to cross the ridge in exactly the same place, resulting in the permanent ruts. 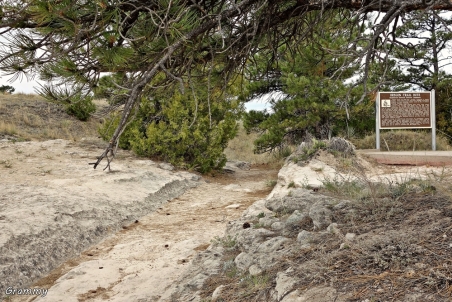 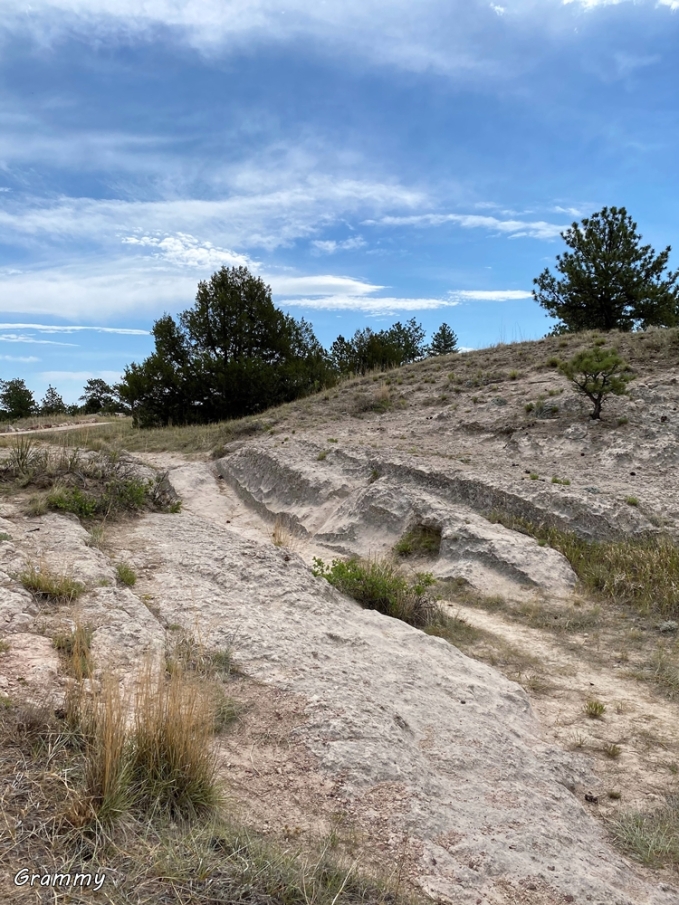 Register Cliff was an important landmark during the westward movement across the United States. It was a key checkpoint for travelers to verify they were on the right path, and it became custom for them to record their name and date of passage in the soft sandstone of the cliff. Many of the inscriptions at Register Cliff are from the 1840s thru 1860s—the peak years of travel along this stretch of the Oregon Trail. 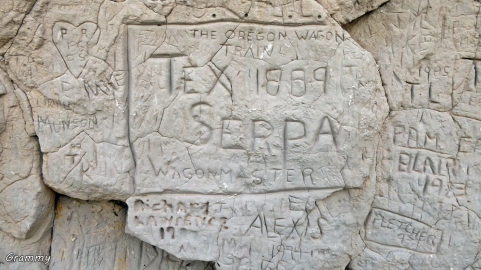 Another stop before we reached the Grand Tetons was Ayres Natural Bridge Park, located just south of the Oregon Trail. Crafted by the hands of Mother Nature, it is one of only three natural bridges in the country with water beneath it. Weary pioneers would relax here, making it one of Wyoming’s first tourist attractions! 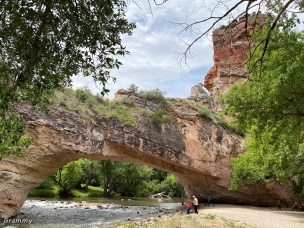 We spent the second night near Riverton, Wyoming and got an early start the next morning so we could enjoy as much time as possible at Grand Teton National Park. Unfortunately, the closer we got to Grand Teton, the colder and rainier it got… and the rain turned to snow just before we reached the eastern entrance. Our plans to stop at every scenic overlook inside the park no longer made sense as the low clouds and fog severely limited our visibility. I know there were mountains at the Grand Tetons, but we didn’t see them! 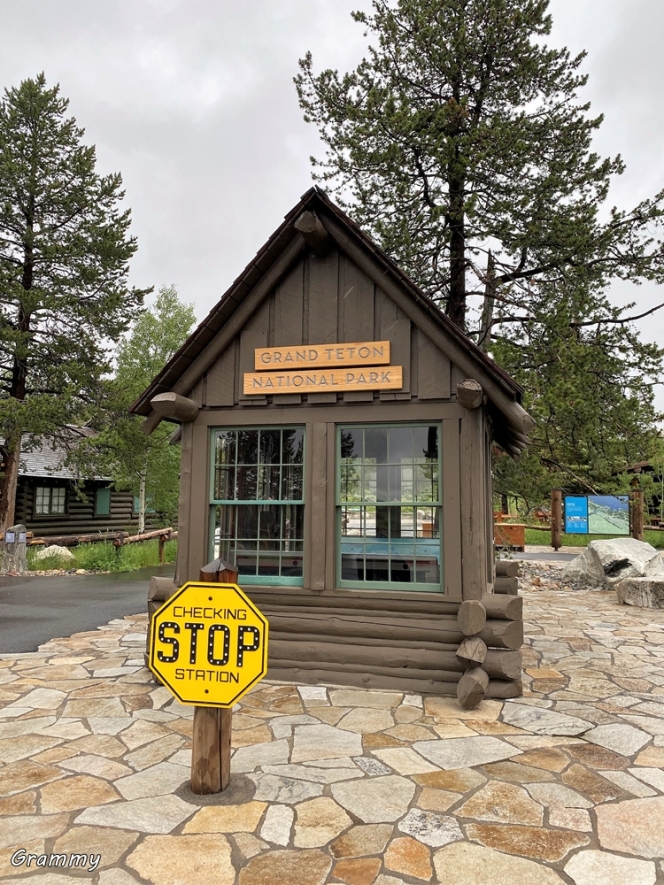 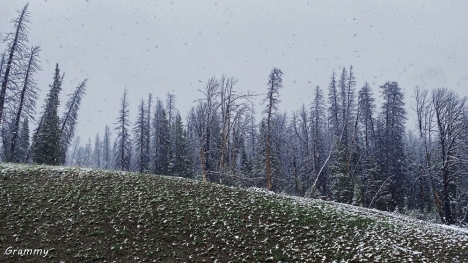 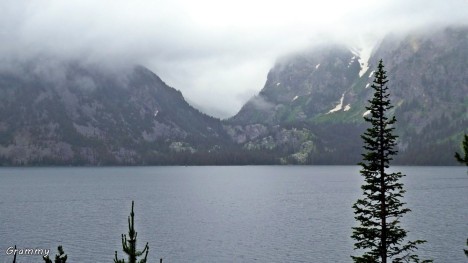 We made our way to the park’s southern exit, then further south to Jackson Hole. Lunch at Snake River Brewing was a wonderful experience. So good! So clean! We took our time leaving Jackson Hole, hoping the sun would burn away the fog back at the Tetons. It did not! So, we left Grand Teton from the northern tip and drove the few miles between it and Yellowstone’s southern entrance. 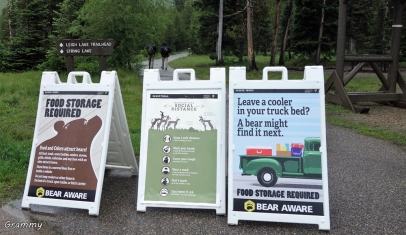 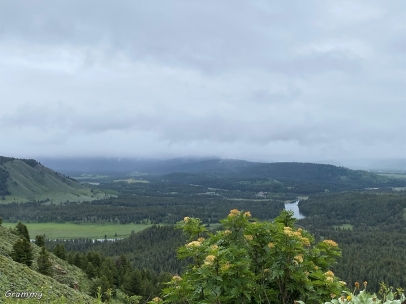 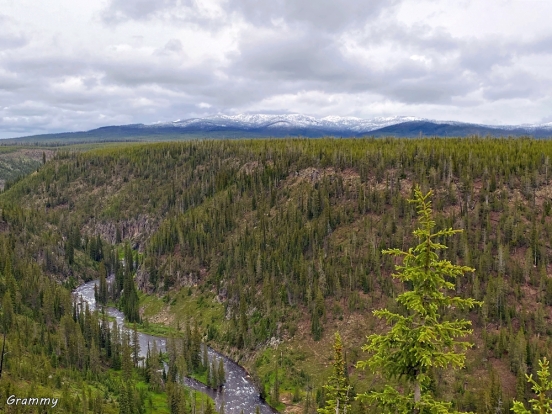 Yellowstone is a huge park containing 2.2 million acres of land and 370 miles of paved road. It is 66 miles from the south entrance to just outside the western entrance where we had booked accommodations for the next three nights. In the little town of West Yellowstone, we checked into the cutest lodgings of our trip and hoped for better weather in the days to come. 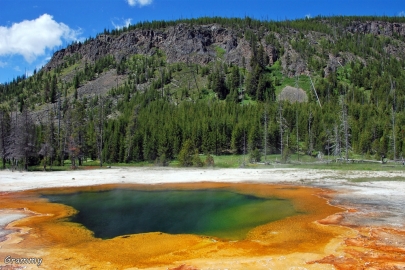 We loved Yellowstone! We experienced everything from desert-like landscapes to green alpine meadows; 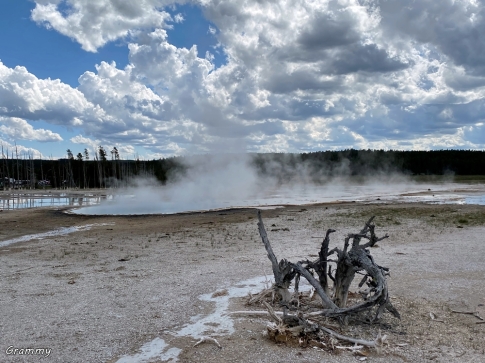 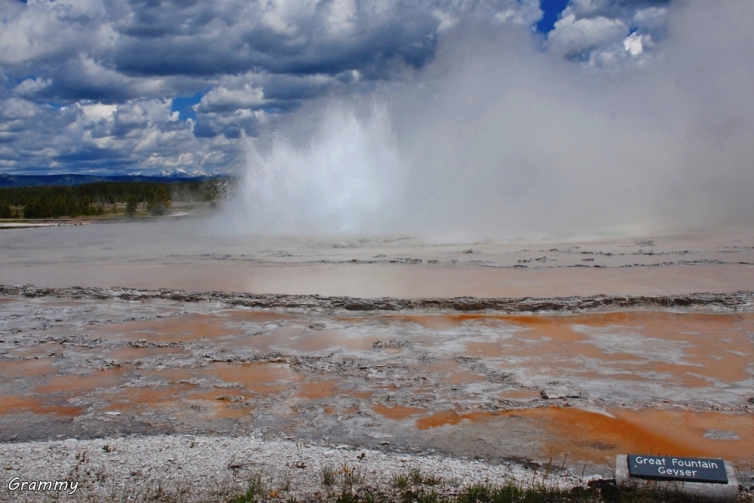 from bison, bear, elk and crows to graceful trumpeter swans; 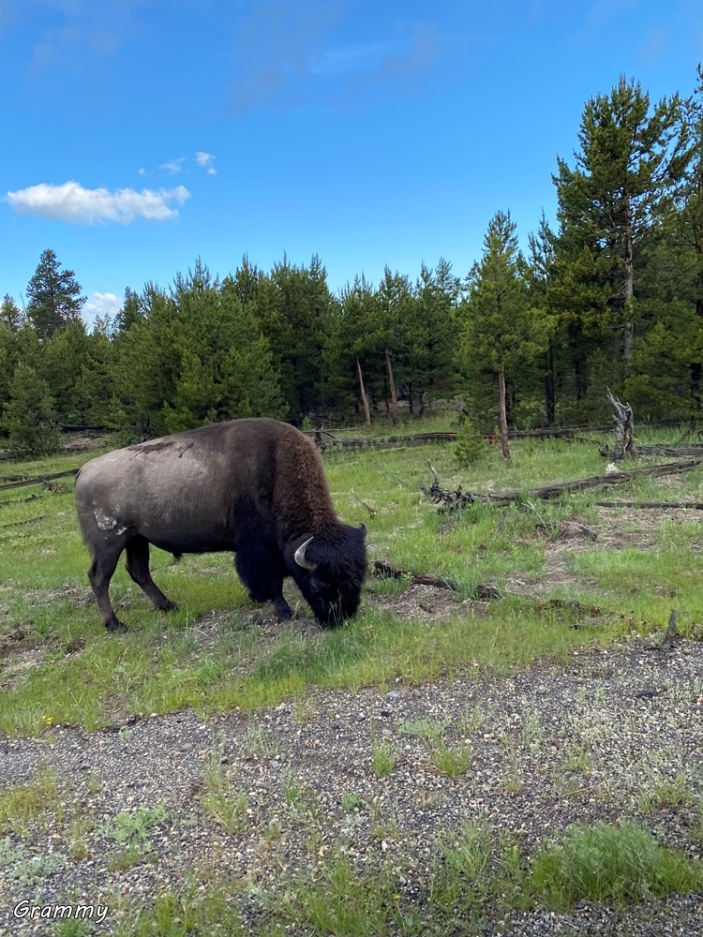 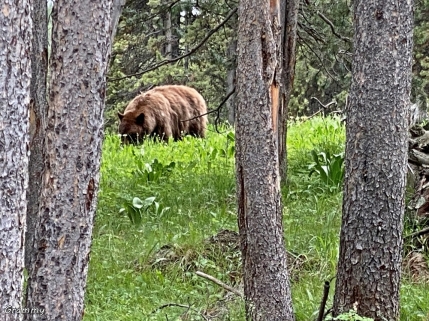 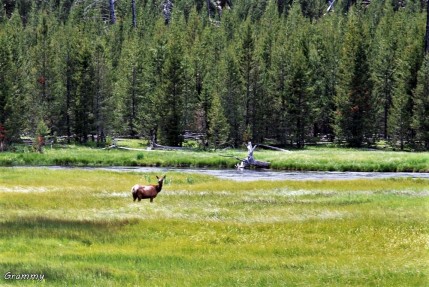 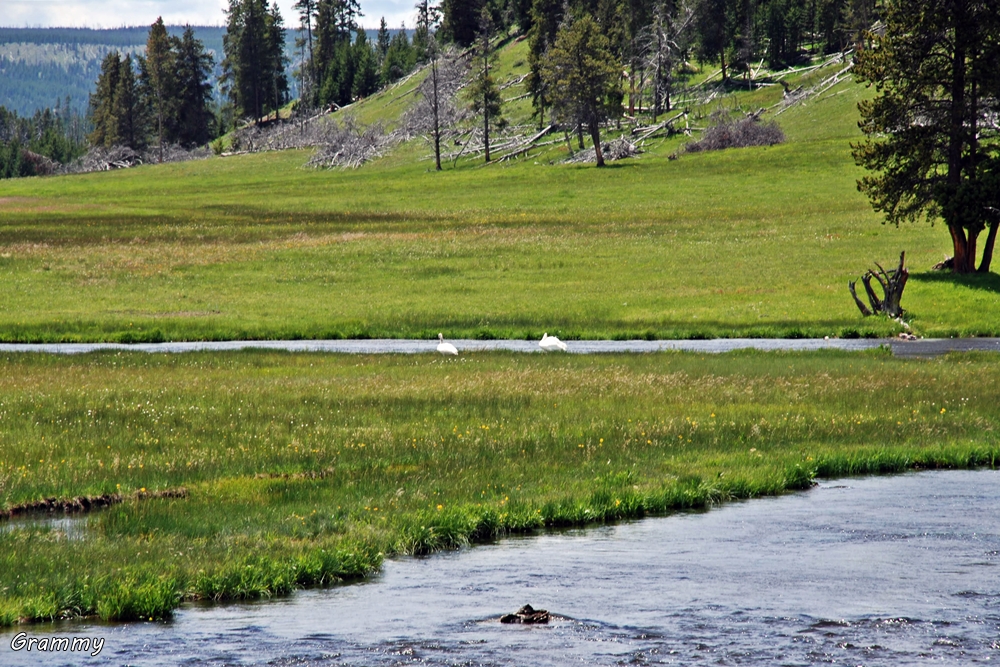 … and from congested roadways to nothing else around us but natural beauty!

Our only disappointment was that a portion of the main road was closed in the northern section of the park.  Also closed inside the park were lodging and dining facilities, so we packed a lunch each day and enjoyed picnics immersed in nature. All other visitor services were very limited, including restrooms with running water. Here is an assortment of images from our two-and-a-half days in Yellowstone: 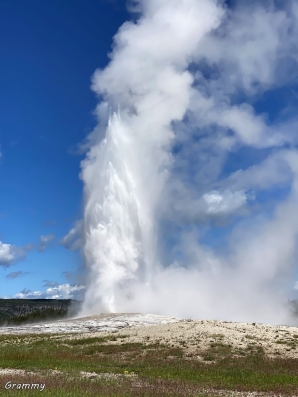 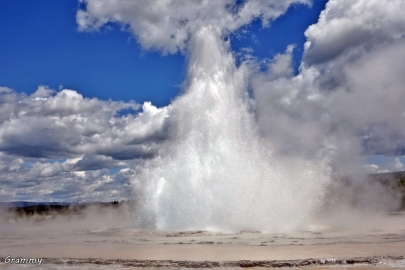 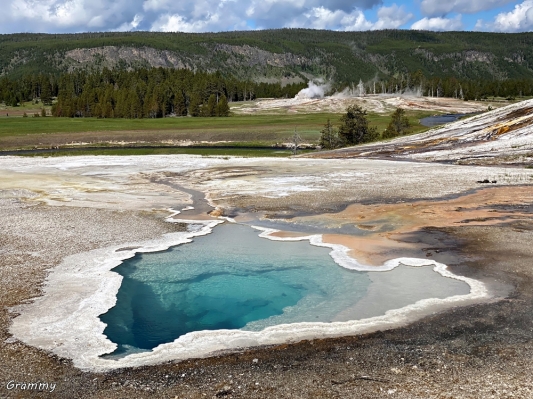 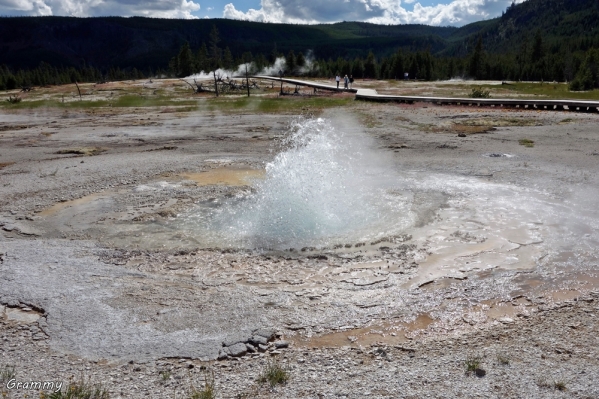 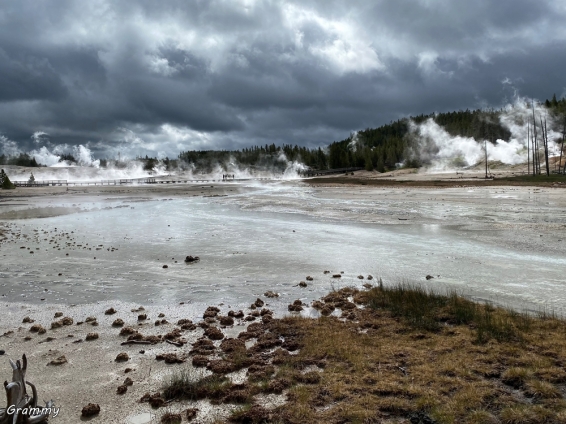 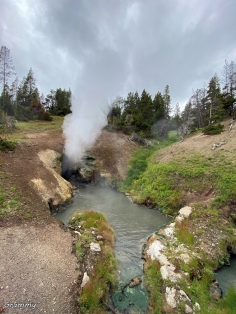 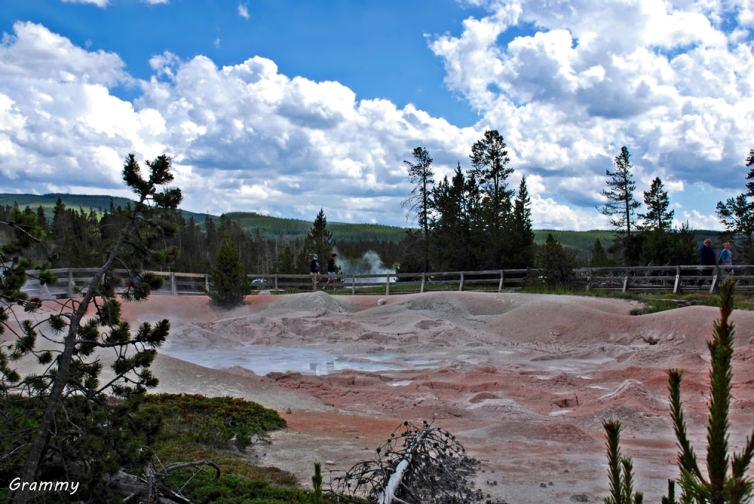 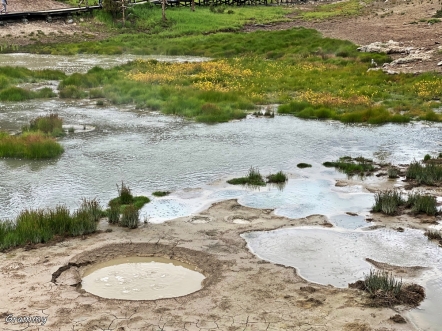 Next: Part Three – Glacier National Park and the route home

As always, if you receive this post by email, please click on my site for proper formatting.