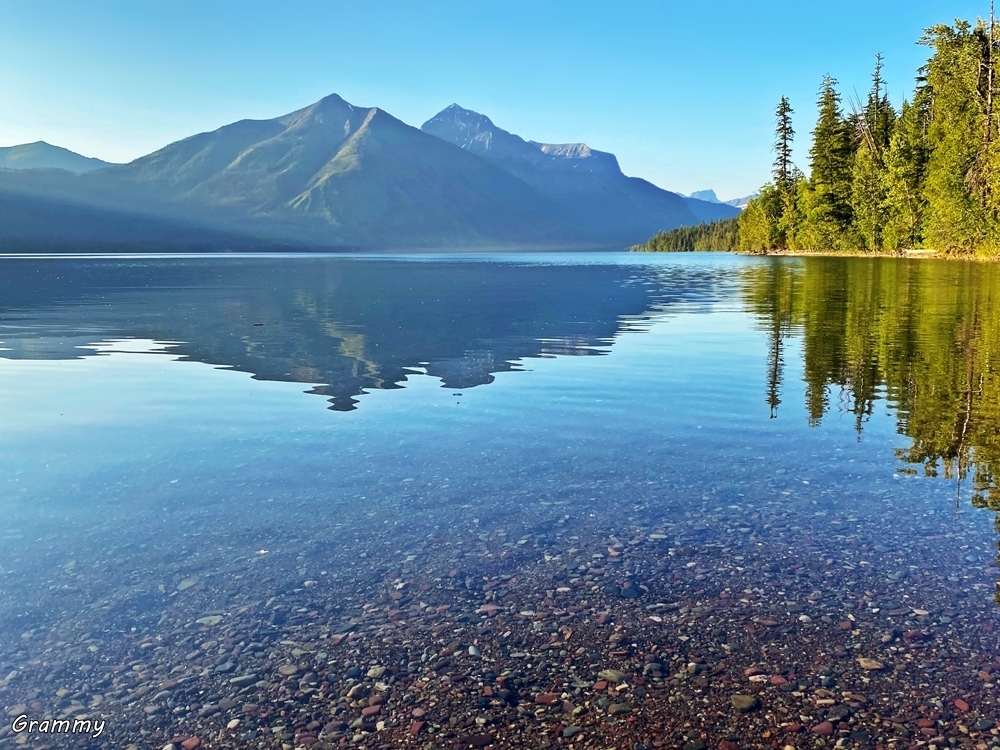 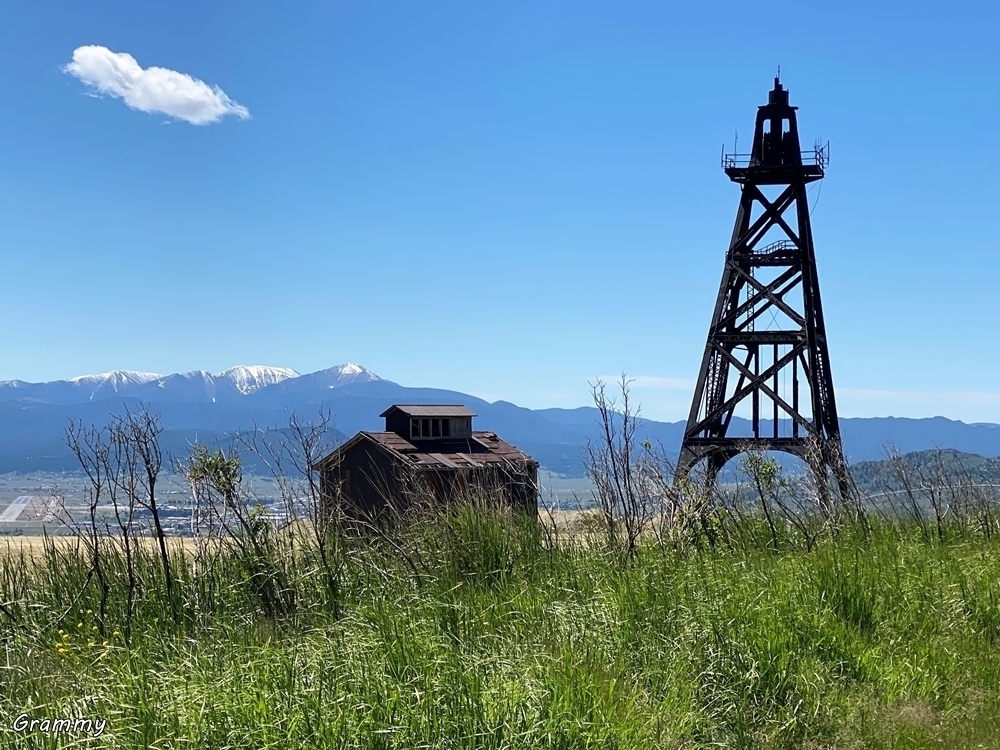 As much as we enjoyed Yellowstone, the time had come to move on. Only twenty-five minutes from West Yellowstone is Quake Lake. The lake was created after a terrible earthquake struck the area in 1959. For approximately six miles, the highway parallels the lake where you can see the effects of the earthquake and landslides. The visitors center was closed (due to Covid-19), but it provided a lovely view and plenty of outdoor information to help us understand what happened here. 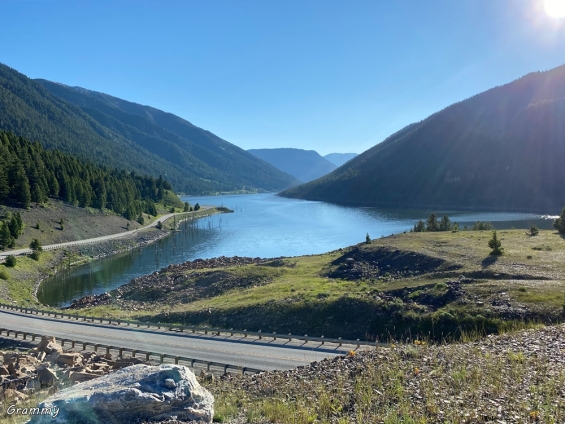 On the Continental Divide in the northern Rockies, Butte, Montana is best known for its rich mineral deposits – especially copper. Headframes, which are old mining structures that tower over the remnants of a mine, dot the town. We visited the historic district where Butte’s colorful past can be seen, and drove to the Granite Mountain Mine Memorial, dedicated to the 168 men who lost their lives in a mining disaster in 1917. 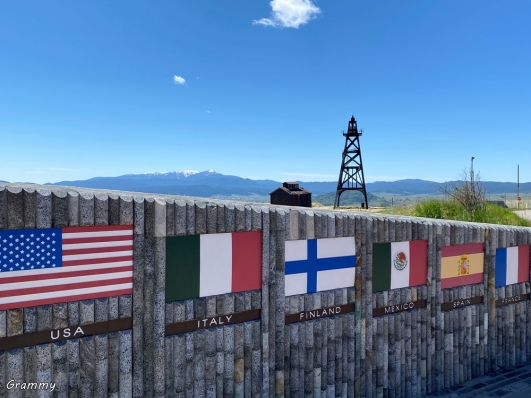 After an overnight in Missoula, Montana, we made an early morning stop at Ninemile Ranger Station, a historic remount depot and working ranger station, complete with a self-guided tour. It has served packers, firefighters, and pack animals in this area of forested mountains since 1930, and bred mules for 32 years to assist with fire suppression.

We spent several hours in charming Wallace, Idaho – the silver capital of the world.  For over 100 years, Wallace has been the world’s largest silver producer, making it the richest mining town still in existence. The entire town is listed on the Nation Register of Historic Places. 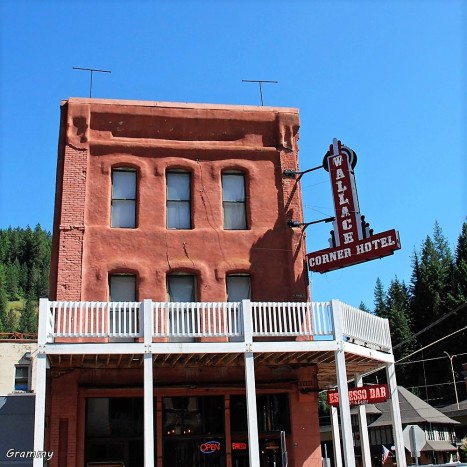 We made it to Coeur d’Alene, Idaho in time for lunch with my nephew who lives there, and my sister and her husband who were visiting! We loved our time with them over the next few days, but it’s of little interest to anyone but family, so I’ll spare you the details!

When we left Coeur d’Alene, the forecast looked nearly perfect for Glacier National Park, but we had one more stop before we got there: Kootenai Falls and Swinging Bridge. We hiked along a dirt trail from the parking lot, over a railroad bridge, through towering trees and large boulders, downhill to where the Kootenai River surges over a 300-foot drop in elevation. It was quite impressive! A swinging bridge provided access to the opposite side of the river, but I wasn’t brave enough to cross it! 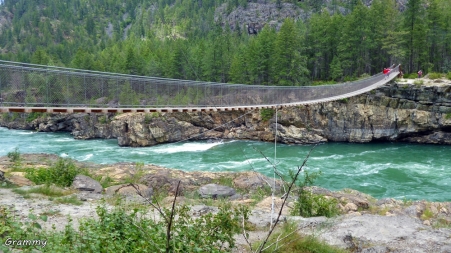 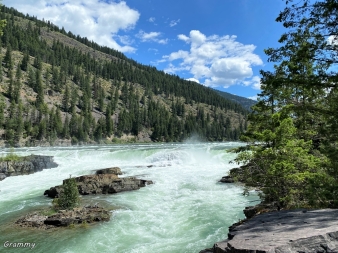 Glacier National Park was one of our most anticipated destinations… and our biggest disappointment! We knew that Covid-19 had a significant impact on the schedule for the National Parks, so when we planned our trip, we checked the status of each of the three main parks on our agenda. Glacier National Park was the last of the three to open, and even though their website said to expect “reduced services and abbreviated schedules”, we booked a cabin for two nights and hoped for the best. Imagine our surprise when we found out “reduced services” also meant no road access to a majority of the park! In early July, the Going-to-the-Sun Road (the main road through the park) was only open for 16 miles! We certainly didn’t need two nights of accommodations to see 16 miles, but here’s what we did see: 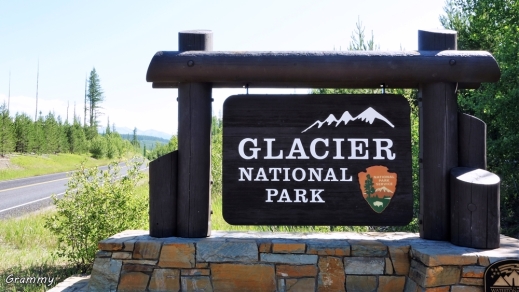 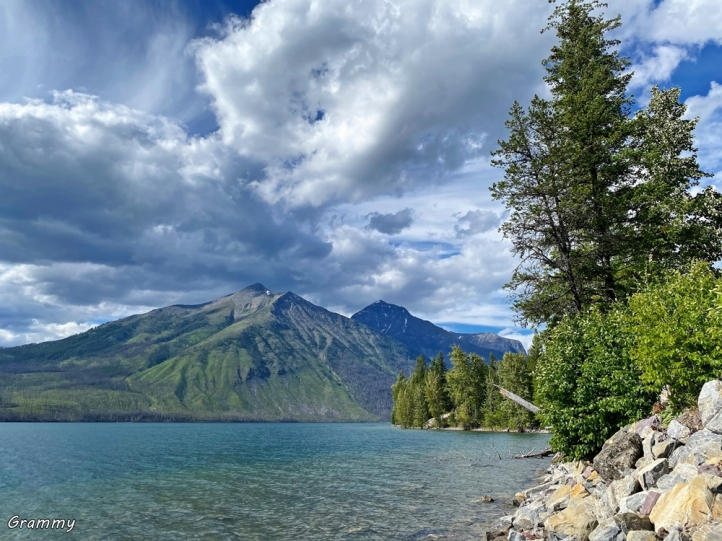 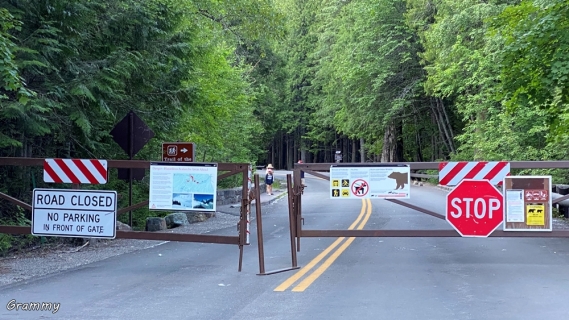 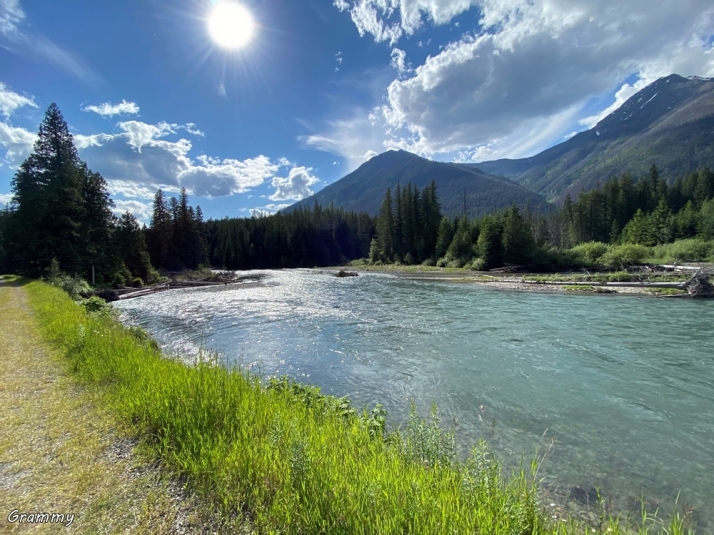 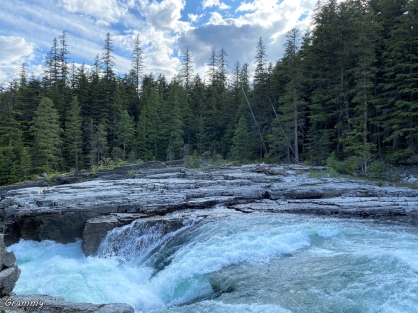 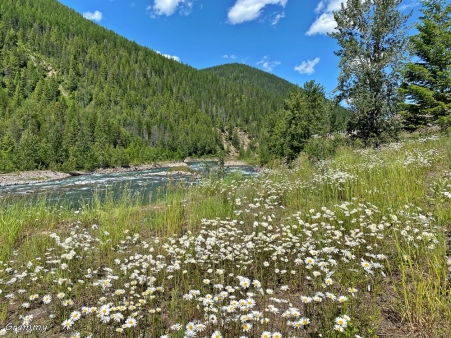 Rain in Glacier on the morning we left seemed appropriate somehow – but the clouds disappeared, and the sun began to shine as Montana opened up to Big Sky country! 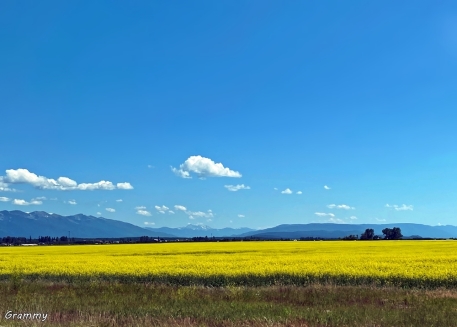 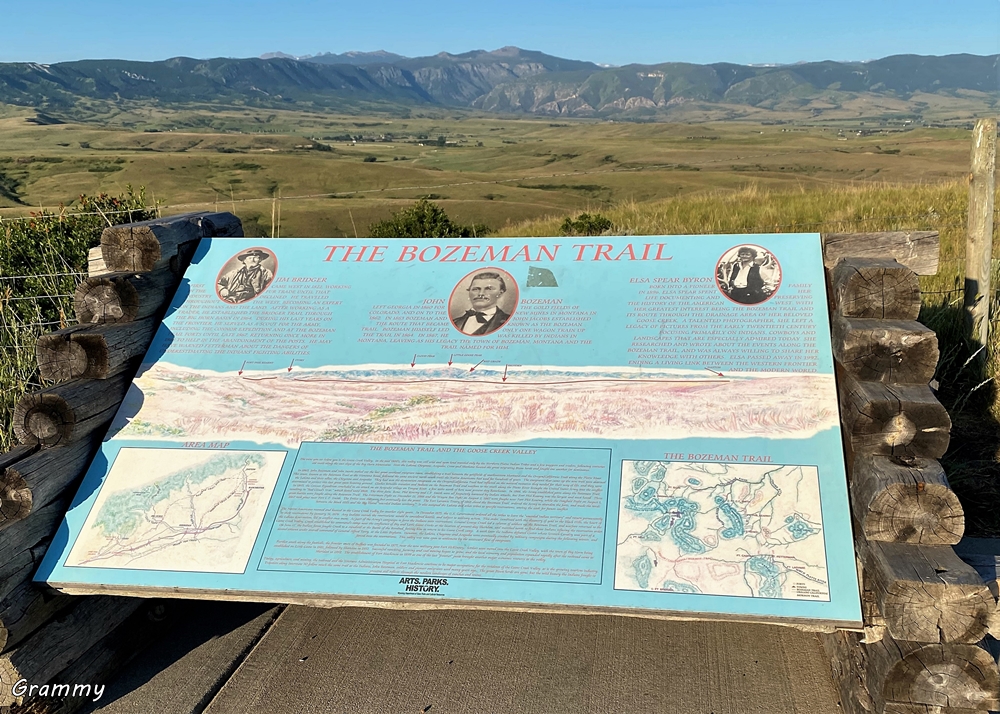 We got to Billings in time for lunch at a brewery and made an afternoon stop at the Little Bighorn Battlefield National Monument. The National Park Service describes Little Bighorn as “a place of reflection” which memorializes the US Cavalry and the Lakota and Cheyenne Indians in one of the last armed efforts by the natives to preserve their way of life. 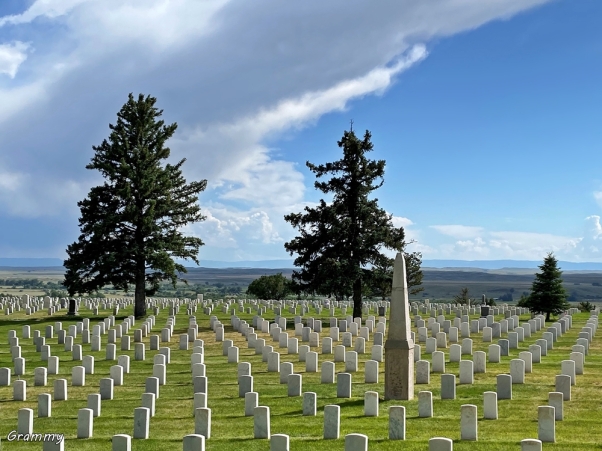 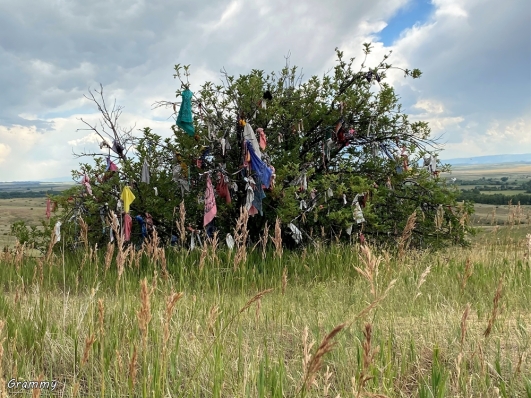 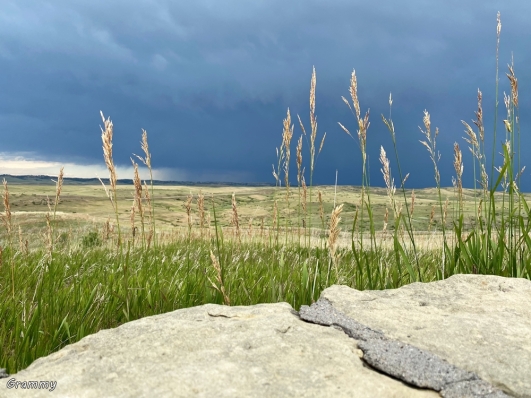 We spent the night in Sheridan, Wyoming which has a great downtown with historical buildings, murals and over 100 permanent pieces of art on display. 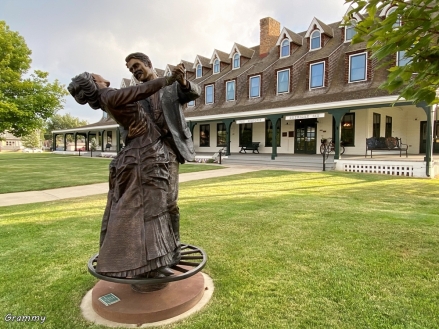 Four hours from Sheridan is the Crazy Horse Memorial, the largest mountain carving project in the world. It is under construction on privately held land in the Black Hills of South Dakota.  When completed, it will depict Indian warrior Crazy Horse riding his horse and pointing off into the distance. 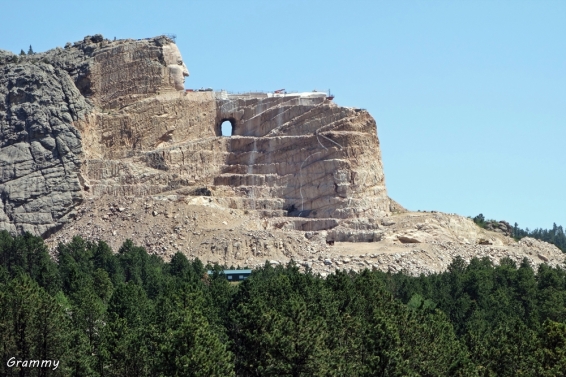 Only half an hour from Crazy Horse is the famous Mount Rushmore, one of this country’s most popular national monuments. The gigantic faces of four U.S. Presidents carved high on a granite mountain was the most crowded of all the places we visited. Obviously, not everyone in this country wants to see our historical treasures destroyed! 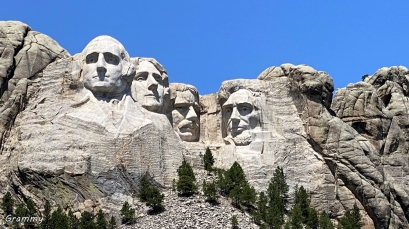 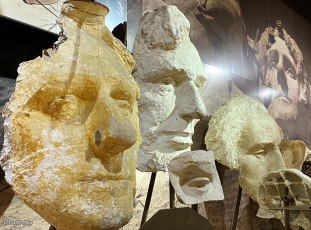 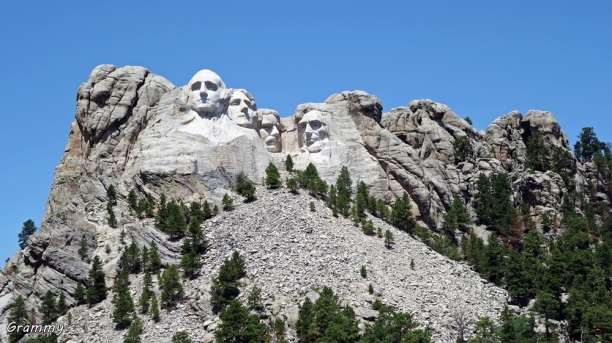 We had lunch at Firehouse Brewing Company in Rapid City, stopped in Wall to see the famous Wall Drug Store, and took the Scenic Loop Byway through Badlands National Park. This 31-mile stretch of two-lane road takes you past incredible cliffs, buttes, and rock spires with plenty of places to pull-out for a better view. 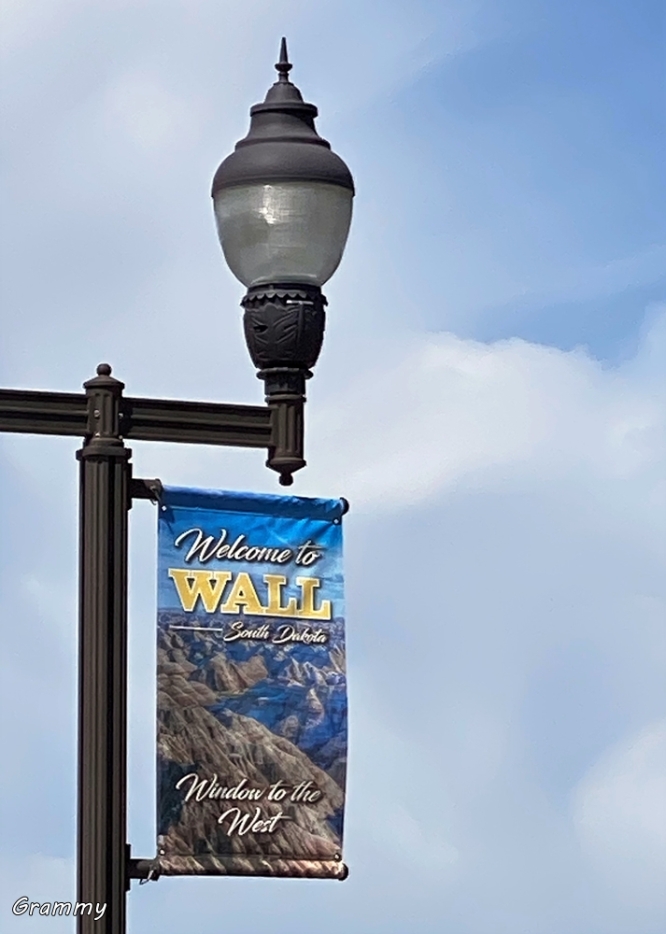 We arrived in Mitchell, South Dakota on the last night of our trip after driving through a fierce thunderstorm. The following morning, we stopped on our way out of town to photograph the Corn Palace, a building on the city’s main street covered in murals made from corn and other grains.

Surprisingly enjoyable was an unplanned stop at Falls Park in Sioux Falls. This breathtaking hidden gem provides various viewpoints of the Big Sioux River as it drops 100 feet in elevation over the course of the 123-acre park. 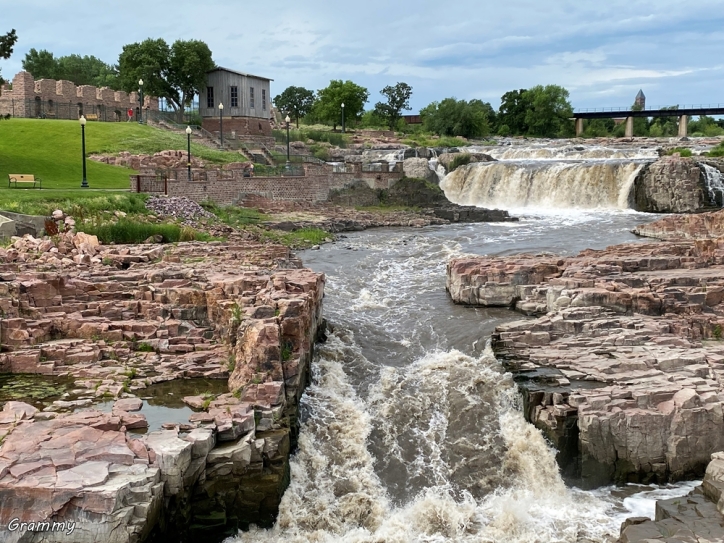 The next thing we knew, we were home… a great place to be after two weeks on the road… but what a wonderful two weeks it was!

As always, if you receive this post by email, please click on my site for proper formatting.

Taking the Scenic Route – Part One